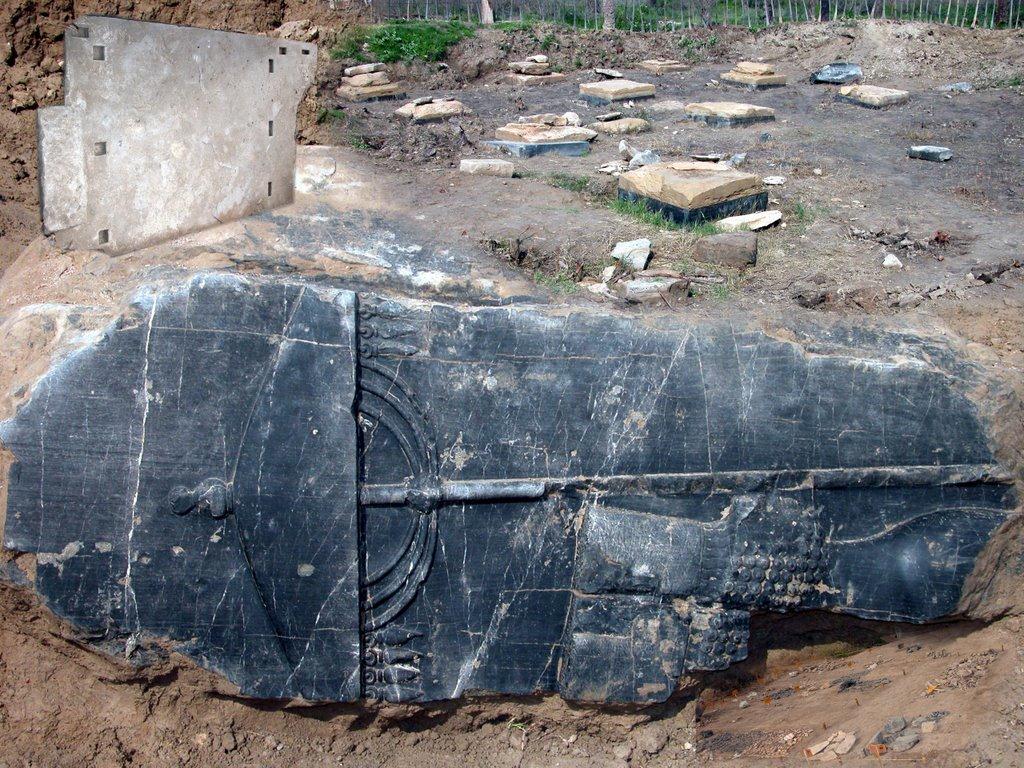 Bardak Siah Palace is the name of the site of an ancient Achaemenid Persian palace situated near the township of Borazjan in the northern part of Bushehr Province of Iran. The site was unearthed in 1977 by Iranian archeologists headed by Ehsan Yaghmai.

Further excavations at the site in 2005 led to a fragmentary sculpture featuring the head of the Achaemenid emperor Darius the Great (r. 521 BC-485 BC) with a servant carrying an umbrella behind him as well as four pieces of gold in the form of thick folded sheets with a combined weight of about three kilograms buried beside one of the main hall’s columns. Yaghmaii said he believed the gold sheets may have inscriptions on them and may have been deliberately folded and hidden during antiquity.

An inscription was also recovered with handwriting in the Neo-Babylonian language.

The capitals of the palace had been decorated with the images of eagles and lions. The eagle was a symbol of power and wisdom during the Achaemenid era. Pieces of the capitals, including eyes, wings, fangs, and snouts, have been discovered during previous excavations. Such images can be seen at Persepolis as well. Six bronze coins were also discovered beside the statue as well as some ornaments made of ivory and several fragments of lapis lazuli and ironstone with the handle.

The archaeological team began the excavations in early winter under the supervision of Yaghmaii, whose earlier team had discovered the Darius Palace in 1977. Darius' Palace is somewhat similar to the Apadana Palace in Persepolis. The palace had 36 columns. Sixteen bases of the columns were unearthed during the first phase of the excavations. Each column rose to about 20 to 23 meters.

Built during the Achaemenids' zenith, the palace had been destroyed by fire in a war.

Location Map
29.3541994,51.1095734
Company Proposal
This awesome service brings full interest information for your purpose
download
How can we help you ?
Contact our Virtual Tour via our support Channel
Contact us